VW engines has been used to power light aircraft since the second world war. It all started in France according to a very interesting webinar by John Monnett about the AeroVee engine. All in all the VW engine as an aircraft engine is a very interesting topic, but real historical info is hard to find. User experience of these engines is also hard to find, usually just net-gossip by people who have never used one. I am used to Lycoming, Continental, Rotax and a couple of hours with Jabiru, I have never flown an aircraft with a VW engine. Below are some simple comparisons of various available engines to at least get some perspective about some of the basic data for these engines.

VW made at least 3 major flat 4 engines, or boxer engines. I don't know what their real names are, but the popular naming is Type 1, Type 4 and Wasserboxer (Water boxer). All these engines are used as aircraft engines.

The Type 1 is the original beetle engine. They were made with a capacity of 1100 to 1600 cc. This is the engine most commonly used today in aircraft. The crankcase is made of magnesium. Aircraft engines typically have a capacity of 1600 to 2400 cc and a power of 50 to 90 HP.

The type 4 was a new development of the air cooled boxer concept. The engine is larger and heavier and originally made for the VW 411 and 412 (we had a 411 when I was a little boy). It was also used in some VW vans and in the Porsche 914. The original capacity was 1700 to 2000 cc. I know of only one commercial conversion of this engine, the Grob 2500 used in the Grob 109b motorglider.

The wasserboxer was a development of the Type 1 engine. It was used in VW vans and came after the Type 4. Sauer and Limbach supposedly use the crankcase of this engine for their larger engines, but it seems to be a custom made case based on the wasserboxer rather than an actual VW crankcase. The crankcase is made of aluminium and is considerably stronger built than the Type 1, yet only about 7 kg heavier and roughly the same size. It was designed for 1900 and 2100 cc. Aircraft engines using this crankcase have a capacity of 2000 to 2700 cc. 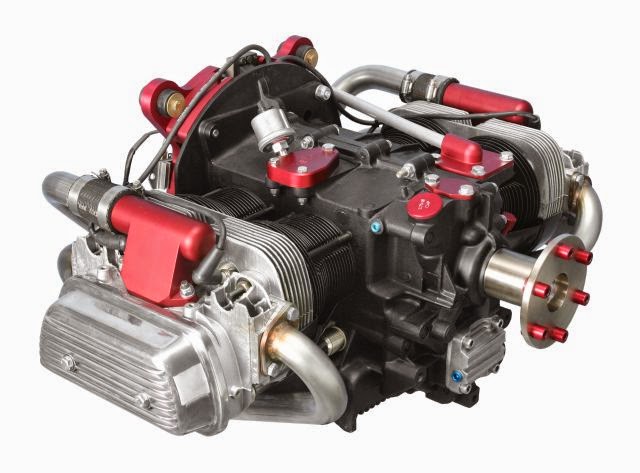 The AeroVee is the engine for which the Onex is designed around. It looks like a fairly simple straight forward engine. It comes as a kit. Type 1. USA
Pro: Have been developed over many years (30-40 years) by people who actively use this engine themselves in many airplanes (Sonex Aircraft). The Onex is designed around it. A Turbo will soon be available, 100 HP. 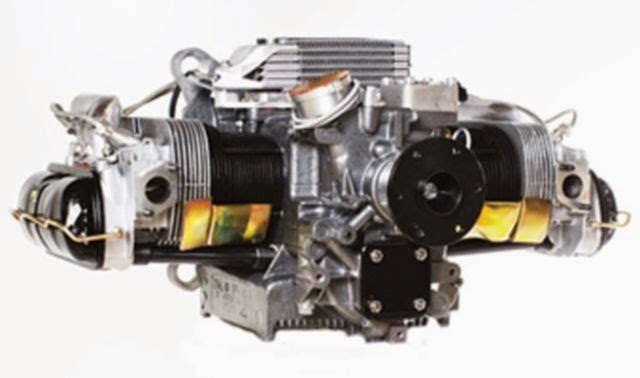 Great Plains have several engine kits from 1600 to 2300 cc. They are straight forward engines. Type 1. USA
Pro: I don't know, but the company seems to be well liked. Some like the Hub with its larger #4 bearing. 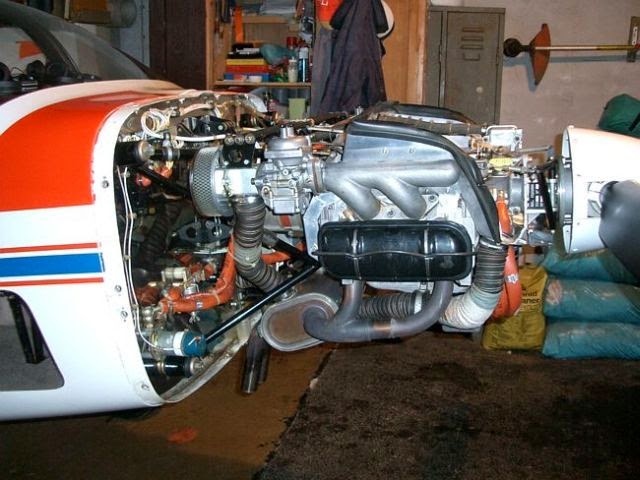 The Grob 2500. This is the Type 4 engine, and one can see the different intake and exhaust manifolds compared with Type 1. This engine is no longer available. Germany 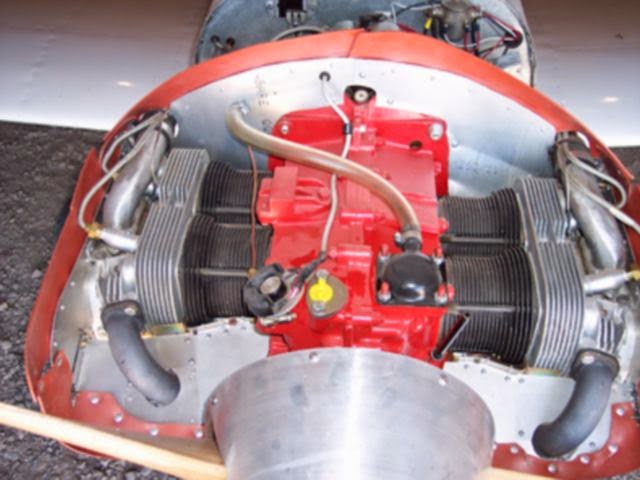 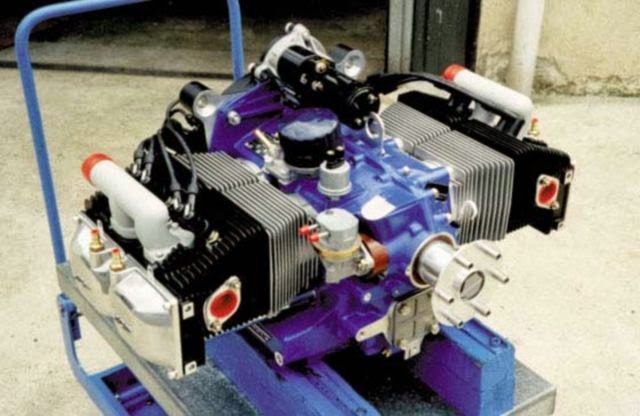 JPX delivered very advanced engines, at least by the looks of it. They are no longer in business, but countless Jodels are flying with JPX engines. The capacity was 2000-2500 cc. Type 1 and some custom I think. France 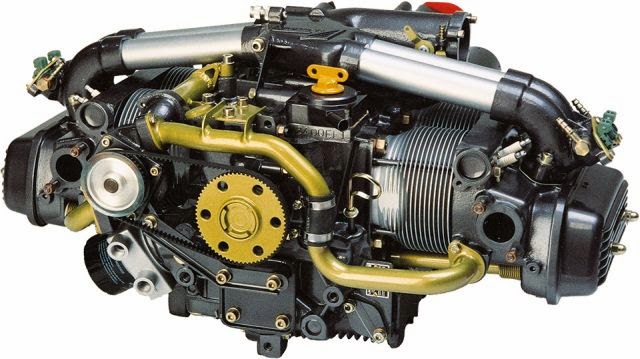 The Motorav engine looks like a very modified engine. It's from Brasil and availability is unknown. Custom casing. Brasil 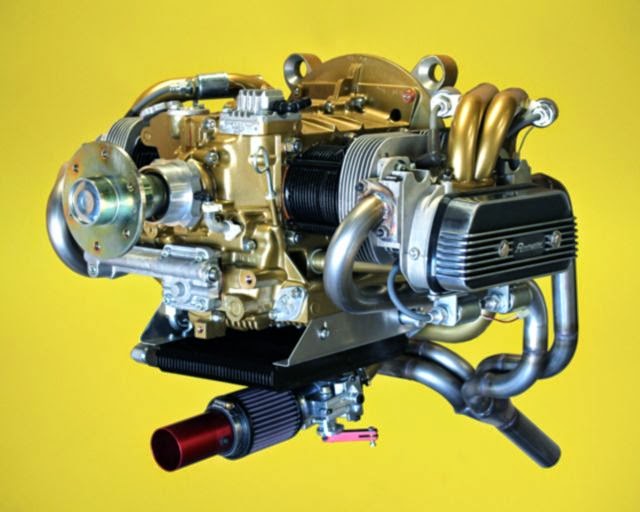 The Revmaster R-2300 looks like a thought through engine. More customized than the other engines from the USA. Type 1. USA
Pro: Simply looks like a very good engine 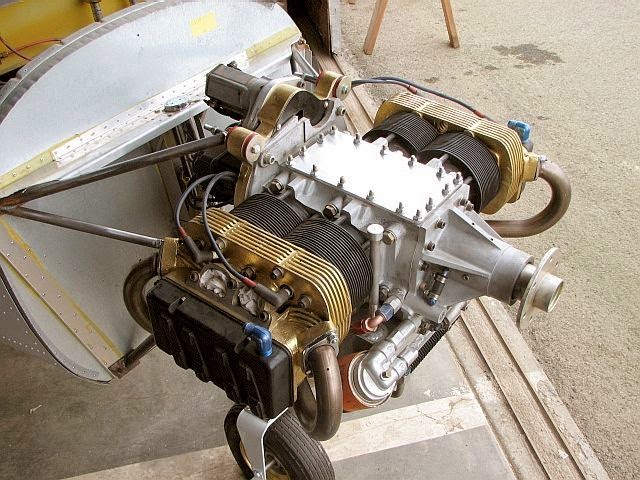 The Revmaster R-3000 is not yet available. It is all custom parts. USA 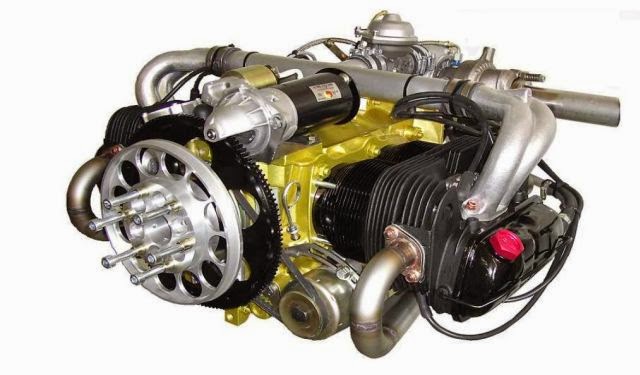 Sauer also delivers very advanced engines. They are very light and powerful. This one is the 2100 ULT (turbo). Sauer has sold more than 750 engines from 1800 to 2700 cc. Sauer engines are often used as drop in replacement engines for older Limbach engines in motorgliders. Type 1 and Wasserboxer. Germany
Pro: Light, powerful and high quality. 1600 h TBO

Here the Bore is along the Y axis and Stroke along the X axis. The bore/stroke ratio is plotted in along with the engines. I don't know exactly what to make of this, but it gives a nice overview of the engines.


Different crankcase and displacement are plotted in this table. The largest Type 1 is the Hummel with 94 bore and 86 stroke. The largest Wasserboxer is the Sauer with 97 bore and 90 stroke